For the Love of Fan Fiction 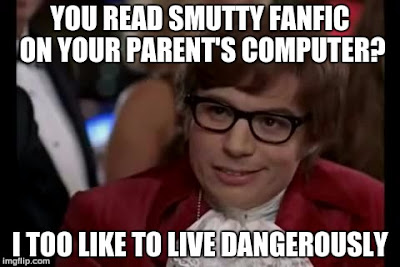 A major part of the nerd world is something called fan fiction. This is exactly what it sounds like: fans (who may or may not have any discernible writing skill) composing short stories about their favorite characters from tv/comic books/movies/books. As of today, I have every confidence that the Twilight series has a veritable lock on the fan fiction market, but in my day (1993-2000) the largest and best fan fiction collections were devoted to Star Wars, Star Trek, Buffy the Vampire Slayer, and comic books. More so than any English class I ever took, the hours upon hours I spent reading fan fiction taught me the importance of creating realistic characters, and staying true to the characters you create.

I bring this up because I recently unpacked all of my books and placed them lovingly onto a book shelf in my study. I have been transient for the past several years and all books have been in boxes. But as I unpacked them and categorized them, I came to the realization that the two most beloved books in my collection were X-Men Fatal Attractions (my very first graphic novel) and a printout of the X-men fanfic "Kid Dynamo" by Connie Hirsch.

Reading it for the first time at the age of 13, I didn't know why I liked "Kid Dynamo" so much. I just knew I liked it, and I knew it was different from the dreck I had to mine through in the FanFic sites. I loved it so much I printed it out and put it into a massive three-ring binder that had previously held my course material for biology class. (Who says you can't teach an entire semester of science with nothing but handouts and worksheets?)

Connie Hirsch, whoever she may be, created an entirely new character and weaved her seamlessly into the already established characters that comprised the New Mutants in the 1980s (under Magneto's leadership). Her character, Jessica, was not a dreaded Mary-Sue, but rather a complex and authentic young girl who came from difficult circumstances. The well-known character of Magneto was not revamped for the story, although some of his rougher edges were shaved off. In the author's defense, Magneto was a good guy at the time.

I loved the character of Jessica so much I wrote my own full-length fanfic using Jessica. Don't worry, it was never published. Ah, the days before I understood the wrongness of ripping off people's ideas. It was because of Jessica and the totality of realism that made Kid Dynamo every bit as real to me as the canon X-Men and New Mutants comics.

Those hours and hours of reading fan fiction formed the basis of my writing style; they made me understand what a good character and bad character looked like, what real dialogue sounded like versus contrived nonsensical crap. It was talented writers (and some really awful ones) who loved the X-Men that gave me my best education, not school marms who made me diagram sentences. Now, at the age of 30, my deep emotional connection to the characters in the Marvel universe is just a distant and pleasant memory as I navigate the choppy waters of real human relationships. But the impact of these characters and my fellow fan writers like Connie Hirsch is still echoed in my writing; I can only hope to one day have that effect on my readers.
Connie Hirsch fan fiction Kid Dynamo magneto new mutants writing x-men