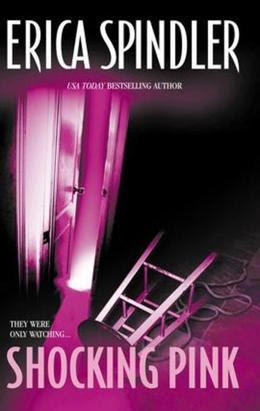 Shocking Pink by Erica Spindler
My rating: 3 of 5 stars

I bought Shocking Pink at a second-hand bookstore five years ago. It had a great cover and an alluring blurb, so why did it take me so long to read it? Who knows? But now I have finally read it and ultimately I am glad I did. The story starts with one of those fantastic prologues that hooks you right in to the story. A body is found in an empty house. She is young, beautiful, and the cop working the case knows who she is. Then the story flashes back to the 80s where we meet three friends, Andie—the sensible friend, Raven—the risk-taking, over-protective, abrasive friend, and poor Julie, who is from an overly religious emotionally abusive home and has the emotional problems you would expect. We follow these girls through their respective troubled high school lives, and we see them stumble onto some very naughty S&M taking place in an empty house in an in-progress housing development. The three girls react very differently to the forbidden actions they see, and it affects their relationship with each other, with their families. This initial introduction, though enticing, rung hollow for only one reason: the dialogue was unconvincing. It didn't sound like the real speech of 15-year old girls, the thoughts did not sounds real, and it was very distracting.

After the woman in the S&M trysts is found murdered, the story jolts forward. The three friends are now 30 years old and their lives have unfolded in predictable ways. Andie is still reliable, now working as a psychologist. Raven is still a detached ice queen with her own business (certainly she would never work for anyone else), and poor Julie hops from one man to another. It is this second half of the book that I found to be the most entertaining, as it was not plagued by that pesky dialogue problem. I enjoyed the story, loved the characters, and would read it again.

I only have one concern. I am hoping that Erica Spindler did not intend the killer to be a surprise. I can't tell if she intended to make it obvious for the reader. If so, she did a masterful job. I saw very clearly that Andie was blinded to what was happening, even though she was a psychologist and should have damn well seen it all along. It was her fatal flaw. So if that was the intent, it worked great. But if Spindler was crafting her characters as if the reader should be as gob smacked as Andie was by the big reveal, then that is absolutely not the case. So while not a whodunnit, I really enjoyed coming along for the rise. Erotic thrillers typically aren't my thing, but I'd say this was a nice way to get acquainted with the genre.