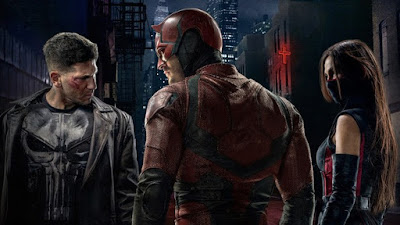 Last April, Season 1 of Netflix's Daredevil landed on the scene with almost enough force to scrub the memory of that rancid Ben Affleck movie from our collective consciousness. The series was awesome, from top to bottom. Season 1 gave us Charlie Cox as Matt Murdock AKA Daredevil, an actor who delivered both physically and emotionally. He captures Dadredevil perfectly, right down to the Catholic guilt that drives him and the Jeremy Irons-like sadness that permanently haunts his face. He is balanced by his law partner and best friend, Foggy Nelson, played by Elden Henson (Fulton Reed from the Mighty Ducks), and Karen Page (Deborah Ann Wohl, Jessica from True Blood) as the classic damsel in distress. The trio make up the heart of the series, but I would be lying if I said they were the most entertaining part of the show.

Like all good fiction, the conflict is derived from the villains. Season 1 gave  us Wilson Fisk AKA Kingpin, played by my imaginary boyfriend, Vincent D'Onofrio. Vinny D has played some truly frightening people (Pooh Bear on The Salton Sea, Carl Stargher on The Cell). But Wilson Fisk is my second favorite, as nothing can replace Goren from Law & Order: Criminal Intent. He was both frightening and sympathetic, with the writers showing the audience exactly who he is and why. He played the type of villain who you were almost kind of sad to watch go down in the season finale, even though you knew he would rise again.

Season 2 brought a whole new batch of villains, first in the form of Frank Castle, AKA the Punisher (John Bernthal). I never read the Punisher comics growing up, as he was too dark and too solitary for me to relate to him or root for him. The previews lead us to believe the Punisher would be our "big bad" for the season, which made it confusing when he was jailed not even midway through the season. Then we realized Frank would not be our terror in the dark. I'll admit it caught me by surprise. When the screen lingers on an old Japanese man looking down at his accountant and says, "Who said I was Yakuza?", the comic book fans all sucked in their breath. Holy shit. It's The Hand.

The Hand has made appearances across the Marvel World, including the X-men and Deadpool, which is why I know about them. They are truly frightening people. And unlike Frank Castle, they do not have the human foibles that make them relatable or sympathetic. They are just terrifying and impossible to stop. They can be shooed away with sufficient effort, but they're never completely gone, as poor Matt will find out.

It speaks to the quality of Daredevil and the trust I have in its creators that I did not immediately stop watching it when they revealed the actress playing Elektra. That is, Elektra Natchios, a Greek woman—played by an Asian lady. Such an unforgivable casting decision might otherwise have resulted in a rage spiral, but in this case I simply waited, having full faith this choice would be explained. And you know what, I was right. Instead of insulting the audience, specifically the portion of the audience that read the comics, the writers acknowledged what they did and why, cementing that the Marvel Cinematic Universe will always in some ways be different that the comic book universe. Just like last season's shocking death of Ben Urich at the hands of Kingpin, we the viewers are invited to be patient and trust there is a reason for all of it. In the case of Elektra, it was done to tie her childhood to Stick (and it was probably hard to find a Greek chick who excelled at Martial arts). In the case of Ben, his death paved the way for Jessica—Sorry, Karen. Her name is Karen in Daredevil—to become the reporter, cementing her growing character arc through the rest of the series.

One of the major criticisms of the more recent Marvel movies is that they have no soul, but rather exist solely to set up the next movie in the franchise. Does Marvel think the movie audience won't notice and/or protest? Clearly not, because they are not repeating this mistake with their tv series. Both in the outstanding Jessica Jones and in Daredevil, it is clear the writers not only trust their audience, but respect our intelligence as well. It's that trust in its audience that makes the series so great.