Review of Gilmore Girls: A Year in the Life


Warning: As with all my reviews, there are spoilers ahead. 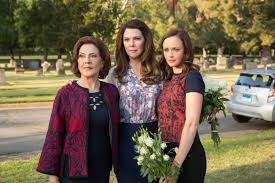 A few months ago, there was a trending hashtag on Instagram and Facebook #3charactersthatdescribeme. I chose Kira Nirys (Star Trek: Deep Space Nine), Barb (Stranger Things), and last but not least, Rory Gilmore from Gilmore Girls. I based this comparison of myself and Rory on two factors: Who Rory was in the original series (2000-2007) and who I was when I watched her. Years later, things... as they must... have changed.

The strengths of the mini series are the same as they were in the original series: the charm of Stars Hollow, the relationship between and among Lorelai and Rory and Emily, and the cast of supporting characters. The death of Richard looms large (literally, thanks to a too-big painting in the parlour) and the absence of Edward Herrman is almost its own character. At least in my life span, Herrman always played wise paternal characters, even when it was all a charade to hide his bloodsucking ways. So his death was a genuine sadness in me, which made the funeral scene and Lorelai's inappropriate storytelling about him all the more real. We also see all our old favorites, including most if not all of Lorelai and Rory's respective exes (I will always hate Digger aka Jason. I don't care what anyone says). Paris and Michel provide the acerbic wit to counterbalance what would otherwise be a too-sweet show. And Kirk and Taylor show up because apparently someone, somewhere enjoys them.

Pop culture references abound, including some prolonged schtick about the book/movie Wild and how it inspired flocks of troubled women to go hiking to fix their problems. Because that's how it works, right? The seasonal segmentation of the series works well, because Rory is an adult now; in adulthood, life seems to come more in chunks than in episodes.

There were some low points to the show of course. Why did we need that 10-minute musical performance in the middle? Answer, we didn't. But more than anything the low point was the all-too real existence of Rory. She with her filthy rich grandparents and her Ivy League education. Despite every benefit, she is drifting lost in her quest to be a writer, and not just any writer. A famous, New York, glitterati type of writer. It's not going well for her, despite a well received piece in The New Yorker. Despite being, by definition, homeless, she doesn't make any new plans. She even goes so far to sneer at a job offer at her old prestigious prep school.

Rory is now that college friend that we all have. The really promising one with the lofty dreams. The one you meet up for lunch with in your thirties and come away from the table shaking your head and muttering under your breath, "Dude, get your shit together."

But beyond the general highs and lows of the storytelling, I found three overarching themes in the mini series that, regardless of all else, made the endeavor well worth it.

A love note to commitment: Emily is hardly tactful when it comes to her opinions on how life should be, not just for herself, but for Lorelai and pretty much everyone else in the world. But she did have one thing right. She pointed out the foolish cowardice of Lorelai's "partnership" with Luke, the one in which she lived with him and loved him, but made no effort to truly bind their lives together, and certainly no commitment to him. Perhaps some may have bristled when Emily called Luke and Lorelai roommates, but she was right on the money. Emily focused on their not being married, but the lack of a ring was not the problem—Lorelai dictating the terms was. If you want me, she seems to have said, then you will stay at the distance I put you and never push for more. In keeping that control, Lorelai thought she was getting what she wanted and what she needed. Because she didn't want to be like her parents. Or perhaps she thought she could never have the bond her parents had. You can see why it would be intimidating—comparing your series of boyfriends to a fifty-year marriage. But in examining her choices, and (I think) really seeing Luke for the first time, she saw that committing to him, for real this time, was what she wanted and needed to do. It was her path to happiness and security. Our society preaches the gospel of freedom and no attachments from every pulpit. It was nice to see the strength of coupledom taking center stage in Stars Hollow.

An affirmation that our circumstances alone do not dictate our lives: When you look at how Rory's life is, well into her thirties, you would think she came from struggling circumstances. But no. Her fabulously wealthy grandparents paid for her to go to the aforementioned prestigious prep school. Then she went to Yale and graduated without loans, again thanks to Richard and Emily. As editor of the Yale Daily News, she also emerged with an impressive portfolio of work combined with influential contacts like her grandfather, his friends, as well as the Huntzbergers and their friends. But she is thoroughly lost and seems to have no tools at her disposal to right the ship.  Contrast that with where Lorelai was at 32. After walking away from her rich parents at 16 years old with a baby and no clear idea of where to go, Lorelai became a business woman. Though hardly destitute (Rory's father always contributed financially), Lorelai forged her own path—managing an inn before opening her own. Or Lane. Married young and having twins very shortly after her marriage, Lane works hard as a mom and her husband Zack supports them in a manager job. Then in the evenings, they still play at local hotspots with the band they founded. It's not glamorous, but it's a good life. Rory's exes Dean and Jess both came from less than stable families and not much money. Both are thriving. Where you start does not dictate where you finish.

Money will blind you: Name one good thing about Logan Huntzberger. Specifically, one good quality he would still possess even if he were middle or lower class. Or even just generally wealthy. You can't do it, can you? Nope. Take away all those elaborate gifts and the stunts he and his stupid-rich friends pulled, take away his smug assurance that the world exists solely for him, and what do you have? An asshole working at Daddy's company who cheats on his fiance with his ex-girlfriend and manipulates people under the guise of being magnanimous. Seriously, Team Logan, what do you like about him that doesn't involve money? What does Rory like about him? That he calls her Ace and swoops in when she's in trouble? That he treats his side-piece nicely? Lorelai knew perfectly well how money can trap you in a golden cage and she tunneled her way out. One can only hope Rory will make that same discovery and be the one who will make her a priority in his life. That's right, I'm Team Jess all the way.

Any fan of the original Gilmore Girls will enjoy watching the new miniseries, there is just no way to not enjoy it. I have every confidence that everyone will take away their own lessons from the show, but these were mine. Regardless of your impressions though, I highly recommend fast forwarding through the musical and the roundtable of critiques that take place afterwards. Seriously, there is no reason for it to be there.

Gilmore Girls: A Year in the Life TV Review