Going Analogue: Why I'm slowly ridding myself of Apps

on November 01, 2018
If you've spent any time on the internet, you've probably seen the meme below or something similar. 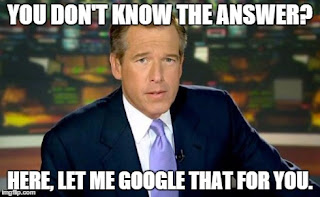 Most of us chuckle at it because we've all been there. Someone asks you a question you have no way of knowing off the top of your head, even though they have the same phone you do, probably right there in their hand. I suppose this meme is great for coworkers or other people you wouldn't speak to if you had a choice.

But a few weeks ago, I said that to my spouse. He asked me a question, one no doubt designed to start a conversation (we were getting ready for dinner, after all), and my reaction was one of irritation. What was I doing that I was so annoyed at being interrupted? I was looking at Pinterest. Yes, I'm serious.

That episode was a wakeup call, one bolstered by my iPhone letting me know that on any given day, I have six to seven hours of screen time. Let that sink in. I'm awake for about ten hours. And for eight of them, I'm glued to that stupid, time-wasting phone. It's starting to become clear why I'm not getting things done.

So what to do? When we have these light bulb moments, sometimes there is a temptation to do something extreme. Since I require air conditioning to live, becoming Amish is out. I also have an aversion to wildlife, so living off the grid is out too. I decided to take more measured steps.


Step 1: Actually listen when people speak to me.

I am currently reading We need to talk: How to have conversations that matter by Celeste Headlee. It came up on my Audible wishlist at exactly the right time. What an amazing book. It examines our current way of communicating (which is basically shouting at each other) and invites us to examine ourselves, stop being defensive, and stop making excuses. As an introvert, I was particularly touched by her admonishment that saying "I don't want to bother people" is a cop-out. Because it is. I just don't want to talk to you. Not because I dislike you (probably), but because face time invites screwups. What if I stutter? I have a lisp that speech therapy has not totally rid me of. What if I spit on the person or their desk? I am way too old to be crippled by this insecure nonsense. And the people in my life and in my professional sphere deserve better than a hastily composed email in lieu of conversation. 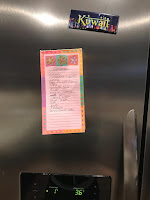 A lot of us use an app on our phone for grocery lists. Some even have a budgeting function so you can see exactly what your total will be and how it fits into your overall food budget. Nothing wrong with that. It's very handy. But more often than not, I will receive a phone call from one of my parents or siblings while I do my Sunday shopping. Either I decline the call because, you know, I'm just too busy, or I'll answer, annoyed I can't simultaneously talk and look at my list and be aloof and distracted while my family member is speaking. Neither of these options is good. So now I have a proper, handwritten list. An additional benefit is that my husband can add things to the list while he's thinking about it, rather than sending me a text from one room over.


Step 3: Get planners. As many as needed.

I stumbled upon the Heartbreathings channel on YouTube recently, and I'm not sure my life will ever be the same. The channel is run by Sara Cannon, a wildly successful indie YA author. I followed her initially because of her writing advice, but she is also a meticulous organizer and I was gobsmacked by how seriously she takes her planning. She is more artistic/crafty than I am, so I do not emulate her completely. She has an enormous number of planners, all individually designed, all with a specific purpose (meal planning, traveling, writing, etc.). As of now, I only have two, one for work (Tools4Wisdom) and one for home tasks and non-work-related appointments (Happy Planner). For me, that's enough and customizing the Happy Planner is a great way to flex my creative skills.

Step 4: Slowly get rid of apps on my phone.

I was going to go hardcore and switch to a dumbphone. However, my dear husband has some personality quirks of his own and he nixed that idea. Not to get too much into it, but he grew up poor and was mocked (and sometimes beaten) for his shabby possessions. As a result, he cannot have possessions that may lead a stranger to believe that we are poor and/or cheap. It's not something I understand, but over nine years of marriage, I have come to accept it. So I'm keeping the smartphone to keep the peace. That doesn't mean I need to be a slave to it. I require Google Maps to exist, and of course, I need my email app for my freelance editing business. But Facebook and other assorted nonsense are already gone for my phone. Once I'm done, I intend only to have the essential Apple apps, email, calculator, Google Maps, my bank app, and Instagram. Since Insta is the only social media platform I really pay attention to in my author platform, it's important. Plus, looking at it doesn't make me feel bad about myself or bad about other people. Hence why I like it.


Step 5: If you're watching television, actually watch it.

My DVR has been full of shows for a while. Shows I wanted to watch, like Mayans MC, American Horror Story, and Manifest. But I never actually watched them, even though my TV was always on. So what was I watching? News and murder shows. Ultimately, I was using my TV as background noise while I played with my phone. This is not good for your brain. I have made the pledge that if I turn the TV on, it will be because I am watching (i.e., paying attention) to a narrative teleplay, fully investing myself in the characters and plot. I'm doing well so far. I've finished Season 3 of Queen of the South (soooo great!) and now I'm working my way through Mayans MC. Once I'm done with American Horror Story, then I will move over to Netflix and go through my list, which I haven't touched in over a year. So no, I have not yet watched Stranger Things Season 2.

I'm hoping this will make me less self-involved and less focused on nonsense. I'm also hoping it will make me a little less dumb, a little less distractable. If I accomplish either of those goals, then this project will be well worth it.
analogue Dumbphone off-grid organization Relationships