Why Are Modern Films Rooting for The Destruction of Humanity? 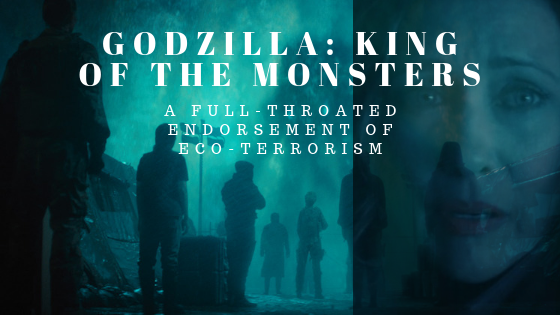 There are many things to dislike about Godzilla: King of the Monsters. The writing is worse than a made-for-tv monster movie (despite the best efforts of the award-winning cast), the effects are lazy in places, and the science... they didn't even try. And it's not even Neil Degrasse Tyson-level stuff. It's having a B2 going at Mach speeds (it can't) and having humans just chilling near multiple atomic explosions and not melting into radiation-induced pustules. But these are minor details. No one expects Godzilla movies to be Shakespeare.

My issue came with the plot, such as it was. I hate to spoil any surprises here, but the main conflict in the plot is that scientist Dr. Emma Russell, played by the lovely Vera Farminga, is working with a band of violent eco-terrorists to intentionally awaken all of "the titans," so they might destroy the earth, or at least a good portion of it. Why, you ask? Because in the last movie, when Godzilla wrecked great portions of US cities, one of her two children died. Her son. As a result of that trauma, she adopted the ideology that Godzilla and the rest of the titans are rising to cleanse the earth of the virus of humans. That the titans are the rightful lords of earth and that they were the original gods of humanity. In furtherance of this ideology, here is a list of what she did:
Her reasoning seems to be, my kid died. Now everyone else's kids should die too. Right now, you're thinking, "Good. A movie's villain should be complex." But here's the thing...

SHE IS NEVER PAINTED AS THE VILLAIN. EVER.

Sceen Junkies rightly pointed out in the Honest Trailer that the whole "I'm going to destroy the earth to save it" motivation is so overdone at this point as to be cliche. But as far as I know, this is the first time the writers and producers of the film are actively endorsing it. Why do I know they endorse it? For three specific reasons.

In her monologue, Emma talks about how cities destroyed in the last movie like Las Vegas were now green utopias, showing footage of trees, flowers, and other greenery growing around the once-grand casinos. Under normal circumstances, this should be a horrible sight. One used to great effect in movies like I Am Legend and The Last Witch Hunter. But in the closing shots, there are newspaper headlines flashing across the screen, accompanied by upbeat music: New Ecosystem forming in Boston! Air Cleanest Levels Ever in Washington DC! Yeah... because everybody is EFFING DEAD.

The second reason is that Godzilla and at least some of the titans are treated as the heroes in this movie. The humans are really just a framing device. This is brought into stark relief when the team is tracking an injured Godzilla into the depths of the earth. They need him to kill Hydra (probably not his real name but who gives a shit). Using an unmanned sub, they find him in the remains of an ancient (very ancient) city. Far beneath the surface of the earth and half covered by water, the city remains largely intact. It is older than ancient Egypt. Older than the Sumerians. There are buildings covered in writing and glyphs no one has seen before. It is apparent this pre-historical people worshiped the titans and lives alongside them (again, lending support to Emma's monologue). So what do they do when they find this treasure, this great trove of knowledge of our species? They. Blow it. Up. With a nuke. Because Godzilla needed a hit of radiation to bring him back to full power. And he's the hero, apparently, so these men and women of science just blew all the evidence of a pre-historical advanced civilization to hell. To save a monster.

And finally, Emma was given a hero's death. She got the dramatic quip and everything. She had the heartwarming reunion with her husband where they searched for their daughter together. She got to stand up and be praised for giving her life to lead the soon-to-be critical-mass monster away from the rest of the group. And then she got to go out like a boss. Everything about her character arc painted her as a sympathetic character, a good mother who had the right idea, but went a little overboard.

For any one of her actions in the list above, Emma deserved to be given a traitor's death--on her knees, bullet to the back of the head. She did not deserve a hug from the man she tried to kill, forgiveness from the daughter she deceived and brainwashed, or the opportunity to bring about the new "cleansed" world she imagined. The hundreds of thousands of deaths she is personally responsible for are never brought up.

I'll admit to not being a Kaiju aficionado. So perhaps there is a precedent for Godzilla being "the good guy." But I can think of no reason why a major Hollywood studio in partnership with a Chinese studio would produce a film that advocates for the destruction of humanity and its accomplishments. And for those of you saying: "Nuh uh! They were only advocating for destruction of part of the human population!"

Which part?  No really. Tell me which specific people should die from being burned to death or crushed beneath the foot of a megalithic monster. And tell me why. Because trees? Some of the people most influential in our culture are getting to a weird place. Some broadcast to the world that they refuse to have children because of climate change, despite the fact that their country has below-replacement birth rates. And some people shoot up the city of Dayton because "humanity is a disease."

We know internet enclaves like Twitter and 4-Chan have a strong nihilistic streak. But are we really in a place where those ideas will be present in our blockbusters? I sincerely hope not. I hope this was a one-off, even a mistake. I hope those BS headlines at the end of the movie were setting up for the Godzilla vs. Kong movie, and not an enticing vision of a world without humans.